I want you to meet a very special patient of mine. Alley is a 12 year old Beagle and she owes her life to a senior blood test.

Miss Alley had an ear infection, this caused her to shake her head so much that she ruptured some blood vessels in her ear and an aural haematoma was the result. An aural haematoma is a build up of blood between the two cartilage layers in the ear. Because the blood has nowhere to drain, she required surgery to correct this. Now, due to her age we strongly recommended that she have a senior blood test prior to her anaesthetic to check her organ function and red and white cells.

What did we find on her senior blood test?

What we found was that her liver function was off the charts. Her ALKP (liver enzyme) was over 12000 and should have been less than 212. It was this incredibly high liver result that caused us to recommend an abdominal ultrasound and what we found was that she had a large liver tumour but fortunately it was in an area of the liver that was operable.

Now, we were all incredibly surprised to find that Alley had a liver tumour, she was clinically well, bright and happy, had no vomiting or diarrhoea and had an excellent appetite. She was showing no clinical signs of liver dysfunction and when I felt her tummy I couldn't feel the mass because it was tucked up on the inside of her ribs.

So, I operated and removed Alley's tumour, we sent if off for testing and fortunately for Alley it has come back as a low grade well differentiated liver tumour which means fingers crossed it won't grow back and hopefully won't spread elsewhere. One month later I have checked Alley's' blood results again and found that her ALKP has gone from over 12000 to 450! It's not normal yet but it's getting very close.

So Alley is definitely the poster child for senior blood tests. I carry them out on my own little dog Jack (in fact I have been since he was about 5 years old). The benefit of doing an annual blood test in your pet is that it can provide us with a trend over time. If your pets kidney function is gradually declining over time then we'll be able to start modifying their diet and keep their kidneys functioning as well as possible for as long as possible. It will also help us to pick on conditions that we wouldn't know about without this internal wellness exam. 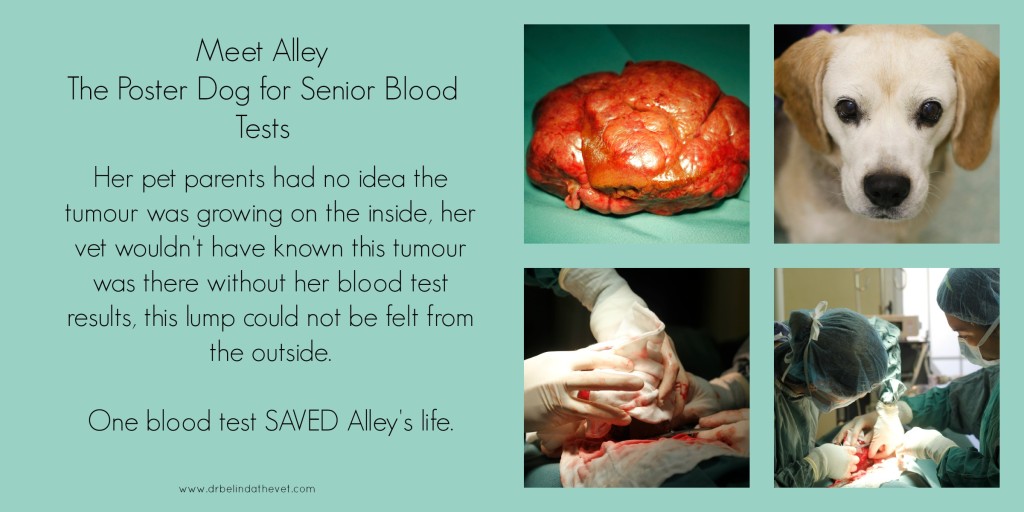 Alley is the poster dog for senior blood tests. Her pet parents had no idea the tumour was growing on the inside, her vet wouldn't have known this tumour was there without her blood test results, this lump could not be felt from the outside. One blood test SAVED Alley's life.

Has your senior pet had a blood test in last 12 months?