Why is Cordelia wearing the cone of shame?

WARNING – this post contains a description of a surgical procedure and some graphic photographs from the day. If you feel queasy you may want to stop reading here.

Cordelia lives with her human parents, her biological mum (Sascha) and her two sisters (Buffy & Alicia).

Now why is Cordelia wearing the cone of shame?

It all started early Monday morning, and by early, I mean really early! At 2am her human parents were woken by a ruckus. They woke up to find a puddle of vomit in the middle of the three sisters. By 3am it was clear that Cordelia was the culprit. She vomited three or four times at home. She started to get a little bit quiet but her temperature and hydration stayed normal. They bundled Cordelia into the car and arrived at the clinic by 8am.

First stop was the consult room and a check up with me (Dr Belinda). She was BOUNCING off the walls. To look at her I wouldn’t have known that anything was wrong. I gave her a complete physical exam and found that her tummy was a bit gurgley (increased gut sounds) and that she was painful in the front part of her tummy (cranial abdomen). We made the decision to keep her in the clinic for observation for the day.

So, little Miss Corky (as she’s also known), got settled into the dog hospital and we waited. Unfortunately she vomited not long after arrival. I had hoped it was due to her recent car ride so we waited a little longer. By lunch time she hadn’t vomited again, however, she was getting a little quiet and if you know Corky, you know that quiet is not in her nature. Right, it was test time, we decided to offer her some food. Uh oh, she wouldn’t eat. This was not a good sign.

So, I jumped on the phone to her parents, “we need to do an xray, I’m not happy that she’s vomited again, she was quiet and she wasn’t eating”. Permission granted and xrays were performed. Uh oh, large dilated loops of intestines, some bunching of her intestines. This does not look good. Back on the phone. “Bad news unfortunately, I think we need to do an ultrasound, I can’t see a clear obstruction but I’m getting plenty of warning signs that something is not right.” No problem let’s get the ultrasound done. 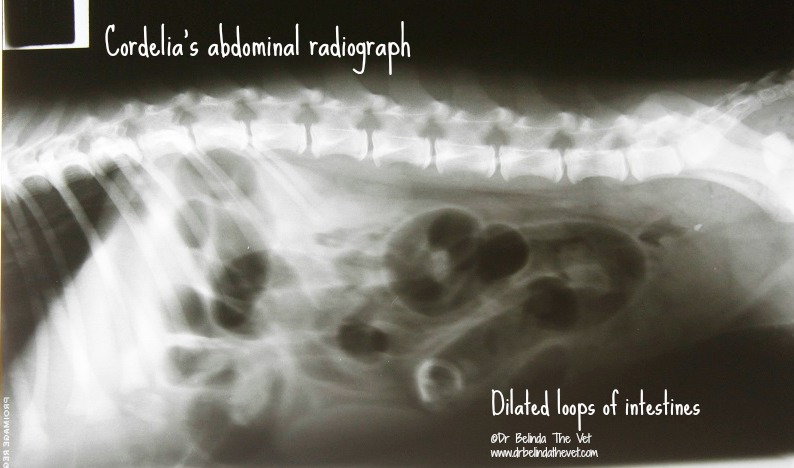 Dr Rob to the rescue. “Belinda it’s school time now, the traffic is going to be terrible, I’ll be there in 15 minutes.” Phew! Dr Rob, is a veterinary specialist in radiography and ultrasound. He travels around Sydney with his ultrasound performing them as needed in general practice. It doesn’t take long to work out what’s going on. Do you want the good news or the bad news… It looks early but we have placating intestines and signs of a foreign body in the stomach… she needs surgery today.

Right, back on the phone.

“Unfortunately our suspicion has been confirmed. Cordelia has a foreign body in her stomach that is causing her intestines to bunch up. She needs surgery to remove the foreign body.” We discuss the procedure, potential complications, cost and plan for overnight monitoring at the specialist centre. Ok, it’s time to go ahead with surgery.

We take a blood sample from Cordelia to check that all of her organs are functioning normally and that there isn’t anything else that we are missing. She is hooked up to a drip (intravenous fluids), given her pre-anaesthetic drugs (which include pain relief) and she is anaesthetised. My nurse Liz then shave’s Cordelia’s tummy, from the end of her ribs to her vulva. We then clean and surgically prepare the area (chlorhexidine wash, methylated spirits and iodine).

Meanwhile I’m getting glammed up for surgery. I perform a surgical scrub on my hands and arms. Slip into a surgical gown and throw on some sterile gloves – looking good! It’s go time! First things first, I place sterile drapes over Corky’s belly. 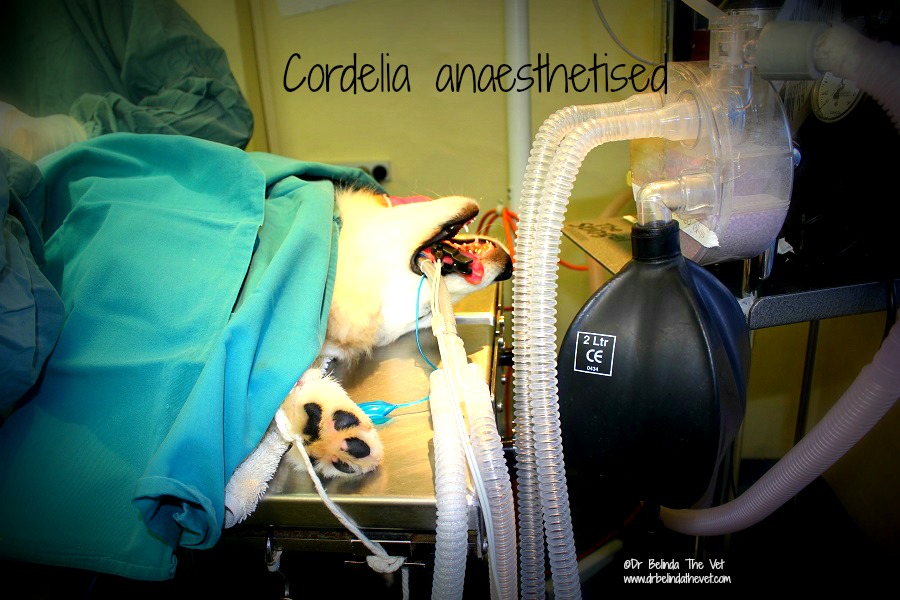 I check her anaesthetic depth and then go ahead with making my incision. The first step is to examine her organs and locate the foreign bodies. I find one sitting in her stomach and causing 10cm of her intestines to bunch up and a second one in her duodenum (small intestine) approximately 30cm from the stomach. My assistant (Dr Alvin), holds the intestines still whilst I make my incision and remove the first foreign body… a hard piece of plastic and a few twigs… I suture (stitch up) the incision and test it for leaks – all clear. 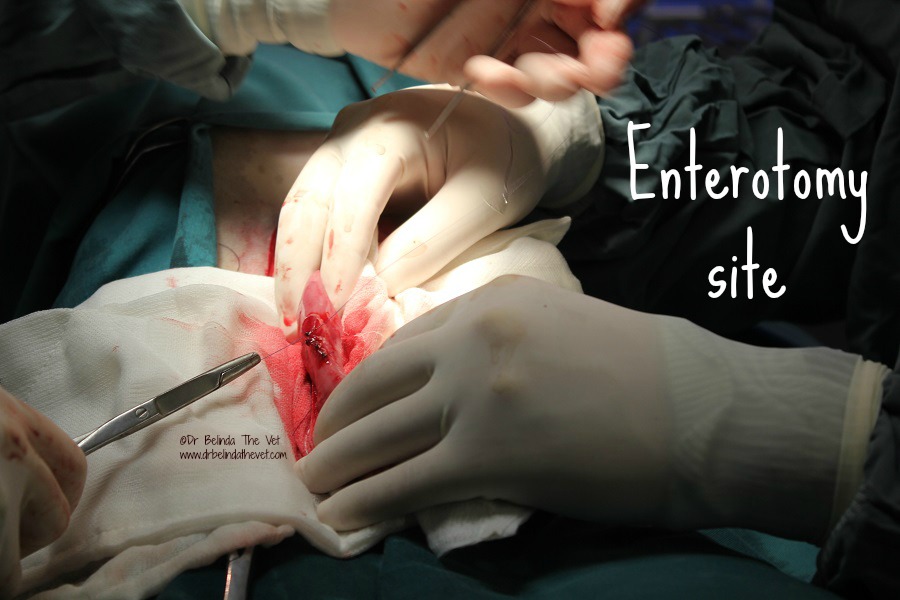 Right, onto the more challenging part of the surgery. I exteriorise the stomach (lift it out of the abdomen) and make my incision. Her little stomach is contracting away, so I have to wait until it stops before I am able to remove the foreign body… waiting… waiting… It eventually stops and I am able to start to remove the object, slowly, slowly, I am able to remove it from the stomach and it gradually feeds back through the intestines and I can see them unbunching. Right, it’s out. The intestines are now happy, the stomach is now empty. It’s time to close. I suture the stomach closed. One final check, a change of instruments and gloves, a flush and it’s time to close her belly. 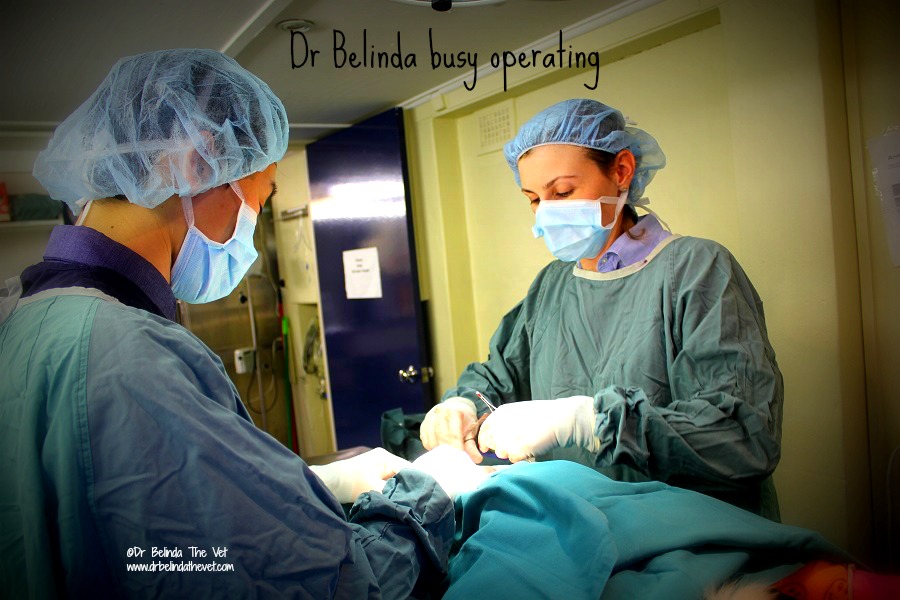 The gorgeous girl comes through her surgery very well. Thank goodness for her astute owners who were so on the ball and got her in to see me so quickly. We were able to remove the foreign body within 24 hours of her ingesting it and avoid much more severe damage to her stomach and intestines. She is one lucky puppy (but I already knew that, she’s got the best human parents and doggy mum).

I give her cuddles whilst she is waking up from the anaesthetic (the nurses keep teasing me because I won’t put her down, they would tell me I’m giving her special treatment but they know that I do the same thing to most of my patients). She wakes up nice and slowly and rests comfortably in her bed with a heat mat underneath her and warm blanket wrapped over her. 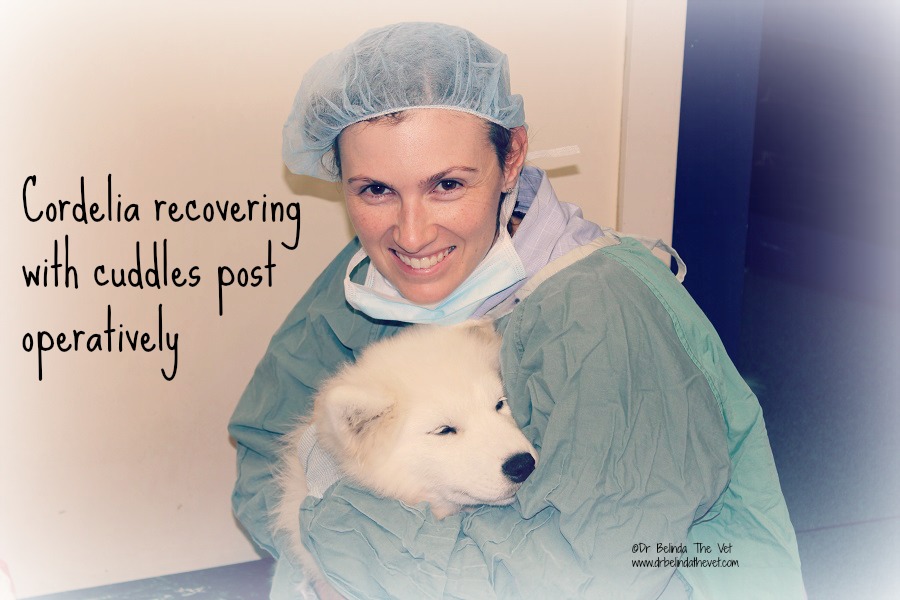 Her human parents arrive and take her to the afterhours veterinary hospital for overnight monitoring. She is recovering well that she is transported back to me in the morning and honestly you wouldn’t have known to look at her that she had major abdominal surgery the day before. She is bright and happy. Her appetite has returned with a vengeance. I keep her in hospital for monitoring throughout the day and discharge her in the evening.

So far, so good. Corky had her stitches out last week and from all reports she is recovering very well at home. She is being rested and feed an appropriate food that is easily digested. I have also instructed her to stop eating toys and sticks. Her parents are keeping an extra close eye on her and keeping her away from anything that she might chew and swallow.

Well… are you still wondering what it was that caused all of this trouble in the first place… she ate part of a rope toy, and broke off some of the plastic that was attached to it. Here is the picture of what I removed. Sorry, it’s’ a little graphic. 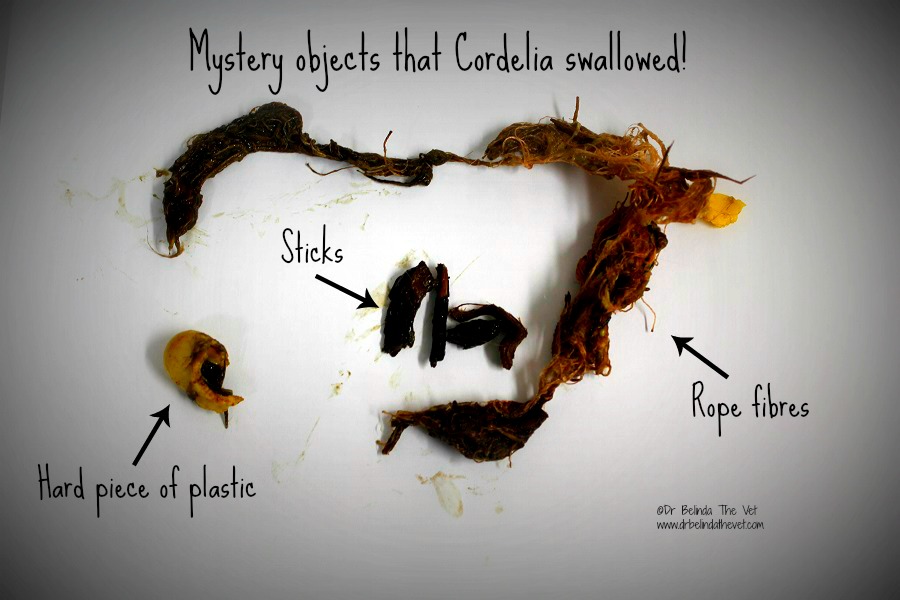 And here is the picture of the toy that she destroyed.

Has your dog eaten something it shouldn’t have?